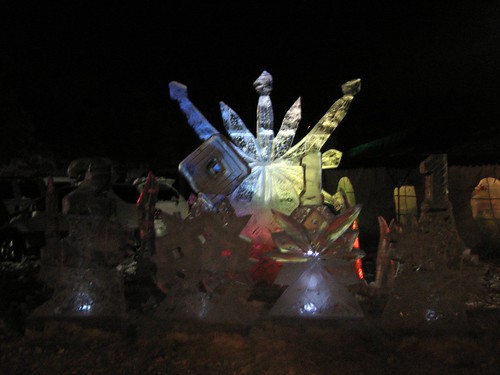 I'm not sure how much a pedant should cost, but I could buy one that looks one-of-a-kind.

"The energy you spend on assaying other people's lives could better be spent on loving others, just as they are, not as you wish they would be.

Look for the good always, in yourself and others.

None of you are guilty of anything but learning. You are not guilty but graced. What learning will you grace yourself with today?"

-- from Heavenletters' "The Tender Being You Are" 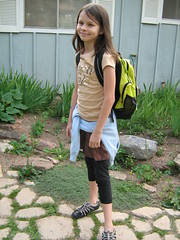 School is back in swing here. Laurel started fifth grade at our neighborhood elementary school on Monday and has made a few friends already. Preschool started for my nephew today too, and it was quite nice to be able to walk in nice weather, see Laurel across the bus loop to the main building and hang out on the preschool playground with my niece while my nephew got signed in for the day.

We also got back to ensuring that cars are actually going to stop at the crosswalk when the light is red before stepping into the crosswalk. This morning we watched a middle-aged woman in an SUV drive through the red light well above the posted speed limit while we were waiting to cross and head into our neighborhood. (I don't know where she was going in such a hurry, but I hope she made it there safely.) Later that morning, drivers stopped at the crosswalk in both directions without us pushing the signal button. We appreciated that.

Laurel might be doing Girl Scouts this year as a Juliette; I'll be jumping back into Cub Scouting with Join Scouting night next week helping with rocketry and whatever make-and-take I come up with between now and then. She brought home the first-year band and orchestra information today and wants to play violin, so we'll see what we can swing there -- based on a neck-to-mid-palm measure, we're looking at a 1/2 or 3/4 size violin, which we may be able to borrow from local friends instead of coming up with $100 for school year rental.

Today marks a month since I left my home of six years in Dallas.

The upshot is that Laurel and I are safely back in Colorado and we have food, shelter and sufficient clothing. We left the majority of our household baggage in Texas, but it's really just stuff.

I'm about to head to Phoenix for a week of getting my kitty fix and some quiet downtime with an old friend, during which I hope to do a lot of the writing I want to catch you up and document my thoughts. Laurel will start fifth grade in just over a month at the same school my younger brother and sister attended and I will share the action plan I've put together with the help of friends and family to work on getting my legs beneath me and improve Laurel's and my lives for the better. (Er, that doesn't look right. Feel free to take a red pen to it.)

I love all of you and am thankful that you've hung in there with me through this difficult year.

Many things both big and little have happened since my last post, but anything I write up I'll get to later.

The big news is that I'm leaving Dallas this upcoming Monday. Things here haven't gone well for a long time yet I've stubbornly hung in there, figuring things would get better. He has said he felt the same way, but we never sat down and had a reasonable conversation about it. There is always blame, but no one is at fault in the end. It just didn't work.

Thanks for hanging in there with me through the turbulence. I appreciate every one of you.

Many of you already know that Kevin fell rollerblading yesterday with a brief loss of consciousness.[1] He refused transport, by ambulance or neighbors, and has a memory lapse of about 3.5 hours. He agreed to see our family practitioner this morning. She took one look at his unwrapped wrist (I splinted it last night) and said it's dislocated, probably fractured, and he could either wait several hours to get in to an orthopedist or go directly to the ER for x-rays. Since old paratroopers never die,[2] he decided to do neither of those things. Instead he got a much-needed haircut, picked up a proper wrist splint, and prepared for an interview scheduled for 1 PM.

I saw him off with plenty of time, printed paperwork in a folder and his netbook charged and packed with its cooling pad. At the last minute I handed him my phone. I'm glad I did, because 20 minutes later he called to say the Mustang's engine cut out while he was on the way to the interview. He planned to cross a nearby overpass to a gas station and get the car towed. In the meanwhile, he talked to the recruiter (he did not have a phone number for the client) and will reschedule. I hope the client makes an offer; the previous screens and interview went well and we got the impression the client thinks he's a good fit.

When it rains, it pours. Also, always wear appropriate safety gear for sports.

1. Most surreal moment: a neighbor kid asked "Is he dead?". I replied, "No, people can't be dead and breathing."

ETA: The Mustang turned out to have a broken coil wire, a fairly simple and inexpensive fix. We'll pick her up from the shop tomorrow since our bank decided to go back on the "we will release part of your latest deposit Tuesday and the remainder Wednesday" after we verified that policy with a supervisor, purchased a cashier's check in our local branch to pay rent, and checked the balance before he left. (Will straighten that out in the morning.) Kevin didn't want me to ask any of "my" friends for a ride, so he started walking. Two and a half miles in, a stranger stopped and offered him a ride the rest of the way home.

Good things since my last post:
- Holy crap, you guys are so nice! I teared up several times.
- We got the electric bill squared away.
- One of this week's phone screens has progressed to a phone interview on Monday. I am hoping it goes well. If it works out I think it will be nice for him to get away from the niche of medical software.
- Someone asked what jobs he's held. In approximate chronological order since graduating from high school, he's been an airborne paratrooper, a carpenter for a custom window company, a medical courier, and held various software developer positions in telecommunications, defense, mobile computing, medical practice and revenue cycle management, and financial software for ATMs. Most of the past 20 years have been in software.
- I learned these ginger doughnuts are delicious: http://www.gourmet.com/recipes/2000s/2004/12/ginger-doughnuts
- I moved some of the wintered-indoor plants outside and transplanted some seedlings. The hanging baskets now have plants in them, the ivy that started taking over the windowsill is trellised in a gallon pot, and I put a couple of seasonal-clearance rainbow pinwheels I had stored away in the other gallon pots. It's silly but they make me happy.

Keeping busy keeps me focused on the things that are good.

I haven't been posting much because I don't feel the urge to add to the numerous blog posts about the sucktacular economy. In light of a recent wave of non-friend and anonymous comments, I'd like to say a few things.

tl;dr? We're out of work, broke, and exhausted. This makes me have little patience for people I don't know leaving condescending and/or rude comments because I am in the process of settling something with Their Online Friend. I'm pretty sure Jesus would not do that.

I made a joke about Abelian grapes today and Kevin laughed. It is nice that despite the craptacular job market, unseasonably cold weather, and our unevenly stocked pantry, some things are still funny.

A happy part of what has been contributing to the unevenly stocked pantry is that a Tweet-length job-hunting story I submitted in February was chosen for a Golden Grant, so we received a dozen boxes of Golden Grahams: 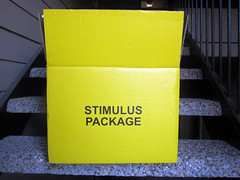 Laurel reports that they are good dry.

It's book fair time again, so my weekdays will be tied up with that through next Monday. Even though I feel exhausted before it even starts, I will bring my A-game because it's a whole week of new-book smell and talking about kiddie lit with real live people. Setup was today after the truck arrived: 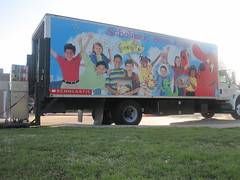 I will be sick of the sound this book makes by Wednesday afternoon: 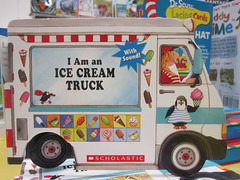 Since I missed taking a photo of the pink hyacinths I saw earlier this month before they went by, here's a blooming tree that doesn't smell like meat (*cough* Bradford pears): 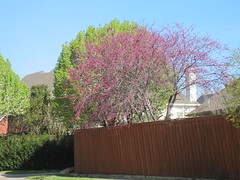 Also, the orchid that I have been watering for the past four years decided to bloom: 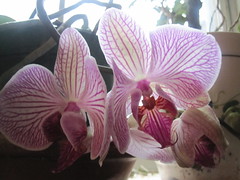