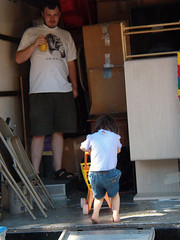 Himself arrived safe and sound in the wee hours of last Monday morning (22 Sep) and between getting things unloaded, making storage decisions, and getting things lined up in the work/school arena, I've barely had time to touch the computer aside from edits to the aforementioned bits I'm doing for Cougar Pride.

Settling in: We opted against having our household baggage crated and stored for three months at a military facility despite the voucher from TMO (I have some choice words about Shady J's TMO office, but that's another post). Right now it's taking my brother's spot in the garage, but Amy and Branden have offered us space in their barn. V. happy about that.

Himself has decided that while I'm only a semi-native, I am decidedly an Evergreen townie because within a week he realized that most everyone still knows me and I can navigate about as far in as the southwestern suburbs of the metro area without a map. I don't understand why he can't do the latter since he's lived in Colorado for all by about four years of his life (if he'd worked on F-16s we could have stayed here, but the South was a learning experience or artistic exile, take your pick).

Random people / D'Evelyn: I'm minorly off-put by people that recognize me despite several years' absence. On Friday, we spent the afternoon at Colorado Mills and two people I hadn't seen in at least five years recognized me and talked to us. Dianna (Evergreen '97, also in Girl Scouts with us) spotted us in the Eddie Bauer outlet and we exchanged numbers, then a few hours later in Barnes & Noble I was scouring the magazine wall for Heavy Metal when Sean Bugay (D'Evelyn '99) seemed surprised to see us, though not by the random selection of reading material I was carrying. Very strange.

On a more random people note, I am apparently being sucked into the D'Evelyn alumni association because (a) no-one else has volunteered, (b) I have an inordinate amount of information on my fellow Jaguar alumni, especially my grad class, and (c) I contacted them last year because I bought the develyn.org domain name when the DEF let it go and they must have taken it as having an interest in those people. I'm not sure how to explain that I just collect useless information like some people collect Hummel figurines or whathaveyou, but at least it'll look good on my resume since I haven't had a real job since Laurel was born.

D'Evelyn alumni may want to mark their calendars for next year's Dash as there's a tentatively planned reunion for all graduates in celebration of the school's 10th year. I am having nightmares already, so you know it'll turn out fine.

Laurel: swim class ended this week. She wasn't into it and wanted to play more than learn basic water adjustment, so we're thinking about gymnastics once the next session starts in November.

The little burrito may be following in our climbing footsteps earlier than expected. Although the official minimum age to climb on the pinnacle at the Buchanan Park rec center is 4, since she has her own harness and both my brother and his best friend work there, we may be able to get her climbing earlier.

Amy and the wedding: the date's been set for the weekend before my birthday next year, vows at Christ the King and reception at the Lakehouse. They plan on staying in their current digs afterward, but the aforementioned barn is on property Branden's grandparents plan to eventually sell to them that's off North Turkey Creek. *sshhh* One of the wedding gifts we've got in the works is a sign for the cabin from Zuni Signs downtown.

My health issues: Local doctor agreed I'm mostly back to normal (only one week of Keeper use in September, yay!) after my non-4th Medical Group-approved regimen of vitamins, especially the A. Once we're got our civilian coverage in place, I'm getting a thyroid screen, a full women's health workup and possibly a referral to have my lower back poked at. Can't say enough wonderful things about Conifer Mountain Family Medicine, plus I'm back in Phenergan again since I ran my short supply from August out handling the drainage from the two-week cold I'm finally getting over.

Work/school plans: Right now I'm picking up freelance projects as I go and working on my personal big projects (the undersea mural in Sarah's room and the painted silk quilt back for Amy's circus quilt). Himself is enjoying terminal leave and just starting to apply for part-time work. We'll both be going back to school in January, him to CU Denver for applied maths, and I'm undecided -- if I can get into UCD's BFA program I'll go with that, otherwise I'm happy to do my gen ed at Red Rocks and hope to get into Naropa for Environmental Studies (their Sustainable Built Environment concentration calls to me in the same way architecture did until maths kicked my ass). 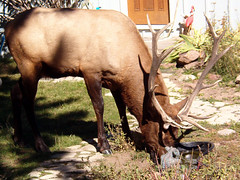 Miscellany: The six-point buck that's the head of the current group of elk that graze in the neighborhood is darn near unafraid of people and I have a picture of him drinking from the garden pond to prove it (we were in the driveway when he walked up). Also scored a Fuji FinePix 2800 Zoom for a song so I'm walking around with way too many battery-powered gadgets in my bag right now: two cameras, the Jornada, my GPS and a cell phone.

Himself has grown a beard because he can. It's not permanent (he plans on going Guard after his separation date, not continuously but losing time in rank means little when you've been an A1C for two and half years) but for the time being it's almost as fun to tickle as

I plan on having the August and September pics up within a week or so, but that's not a promise, especially since I'm trying to locate software since I thought it was all in the desk's shelves and we formatted before installing Windows XP on their computer to make setting up the wireless network easier. (Dad bought a router and a notebook card a few months ago because someone apparently unplugs the family computer's printer every time they want to print a document from their laptop. As the alpha geek in the family, I am expected to install it.)