What I did today: a photoessay

After getting out of bed grumpy (kitten hopped in the bathroom sink at 0330 and knocked some things off the counter, waking me up), I put on my big girl pants (long underwear and Ear Pops) and stood outside for about 40 minutes in near-freezing temperatures to pick up curbside donations for the Gently Used Book Sale. 75 books arrived in two donations. After I took them inside and helped log the donations and count books into boxes, I set off toward Starbucks (used another bit of my prepaid gift card on a Cinnamon Dolce Latte) and the dollar store, where I picked up some fuzzy socks and some office supplies.

Crossing the parking lot toward the road, the sun looked sad and cold hidden behind clouds: 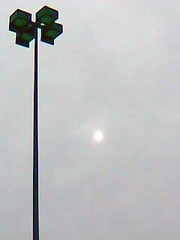 Partway down the block, I enjoyed some exotic glyphs: 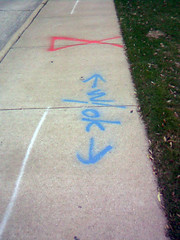 Not really, but it was fun to read them aloud complete with words for symbols ("locate, right arrow, right arrow, what is that red thing?"): 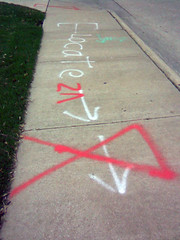 Saw some creepy bare toes in the grocery store: 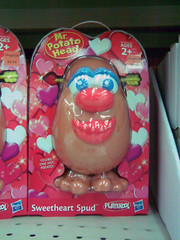 And had a very relaxing seat after I checked out while waiting for Kevin, who offered to pick me up if I bought some sparkling water: 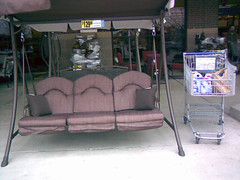 After getting home I did boring early spring cleaning stuff like scrubbing the kitchen floor and kick plates under the cupboards (which was fascinating and grubby), weeding children's DVDs to donate, and eating some ranch Quakes I'd bought at the dollar store.

About a quarter after two, I put my warm outerwear back on, took my golf umbrella and the DVDs, tied neatly in two grocery bags, and squeezed through the gap in the fence to save a few minutes on my walk back to school. I met up with the lady organizing the book drive to get a clipboard and log sheets, then stood out in front of the school in case anyone brought curbside donations in the afternoon.

Some buses kept me company before classes let out: 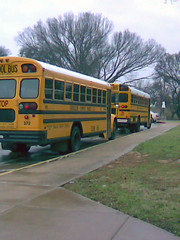 And I unintentionally took an okay photo of myself, other than looking rather yellow because my coat and accessories are really, really pink: 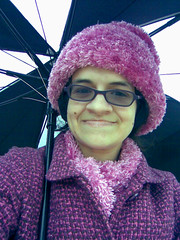 There were no afternoon curbside donations, but there were some carry-in ones including the DVDs I brought over. Tomorrow I will take over the books the girls weeded, a couple of kids' CDs she hasn't listened to in ages (like the Dora the Explorer soundtrack) and a board game she never really got into but will thrill some younger children.

And now I think I will take a nap while everyone else is asleep. Phew.
Subscribe