My back-to-school crud turned one month old earlier this week. It is less annoying now, the cough is much less frequent (and finally productive) and the perpetual sore throat has left.

The flight museum's P-51 flew in yesterday while we were walking home from school, but I was not fast enough at grabbing my camera to capture it. Suffice it to say that it was awesome and loud. REALLY loud. Awesome nonetheless.

Laurel has settled into fourth grade and likes it all right, although her teacher is currently on maternity leave. I think it's something in the water as her teacher was the second of four teachers at our school due this semester.

I am unofficially an assistant den leader to help get the Tigers get underway this year. Their den leader is already familiar with the program, it's just her first year as a den leader, so I think she'll do well. Once they're off and running I might see if the Webelos (fourth and fifth graders) could use help since I've been a Webelos den leader before.

One month to my long-awaited meds appointment. I feel like a contestant on Press Your Luck repeating "no whammies", only I'm repeating "40 mg". I'm pretty sure my doctor will agree to return to that dose but the anxiety voice in the back of my head isn't so sure. (For those of you newer here, I have severe recurrent major depressive disorder. On the lower meds dose I've been at since May I've been struggling.)

It's been raining intermittently this week and got chilly today, so to stave off turning on the heat, I'm wearing a wool sweater over a long-sleeve tee and Laurel is wearing my Where the Wild Things Are hoodie over the clothes she wore to school today. Kevin, who is more sensitive to cold than we are, is hanging out in the study since it's always warmer in there from the server and other electronics. (The shelves holding the modem and routers put off palpable heat despite ample ventilation. It's a pain in the summer but welcome today.)

Here are a few photos of what we've seen lately: 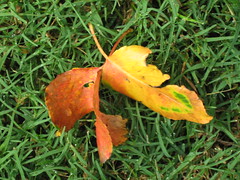 The first couple of turning leaves I found for Miss May. 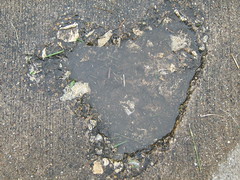 A ding in the sidewalk that looked like a heart. 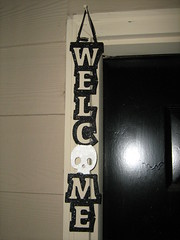 The only Halloween decoration I've felt up to putting up so far. (Yes, it's beglittered.)
Tags: 369.43_scouting, 372_elementary_school, 779_photographs, sick
Subscribe