After running into stop-and-go traffic a few miles from DFW, we checked our luggage in curbside and emerged from security screening with enough time to grab a *gack* Happy Meal for Laurel before boarding our flight. United's in-flight entertainment has just one video channel of some packaged NBC segments, so Laurel listened to music and colored for most of the flight while I alternately read and listened to air traffic control chatter until we arrived at our gate in Denver a few minutes early, then met Dad and Sarah in the terminal.

We went shopping at Colorado Mills on Thursday, where I filled a few of my own holiday wishes thanks to the Eddie Bauer outlet and the serendipitous discovery of a beanie that perfectly matches my scarf. Laurel had her photo taken with Santa and told him she wanted a Barbie. 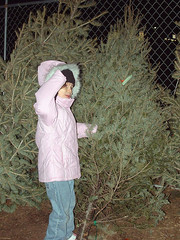 We stayed in most of Friday, making an early evening trip out to pick up a few groceries and a tree. The local tree lot we stopped at had just one tree left under six feet tall and it was nearly as wide as it was tall, so we picked out a 7.5' balsam fir and cut it down to size at home. It smells divine.

We planned to make gingerbread cookies today but Laurel has a bit of a stomach bug, so we'll do that later. We did let her open one of her gifts early and she is now running around with a cute little kids' camera that I'll upload photos from later for your viewing pleasure.

I've gotten a bit behind on holiday wishes I'd like to fill, so I'll address them in bullet points.

boosey: I'll have the Cappiello notecards in the mail after the holidays.
-

eilonwy: the four Mirabilia patterns I've had stowed away here in Colorado are Fairy Flora (MD-7), Titania, Queen of the Fairies (MD-38), Adia, The Garden Fairy (MD-41) and Deepest Love (MD-42). They are unopened, but all except Titania are missing the sample photo from the front of the pattern envelope. I also have Fairy Idyll (MD-21) in my pattern stash in Dallas. If you want any of them, e-mail me with your current mailing address.
-

paradoxymoron: if you still want the DVD of Amelie, e-mail me with your mailing address.
-

ts_garp: I can mail the wireless headphones out your way after I return to Dallas.
Collapse