Sinuses are being evil again (hello incoming storms!) and Himself reality-checked my regular fantasy cure. The upshot is that the cure would be worse than the disease. Meh. If anyone has a bottle of Ponaris they'd like to part with, drop me an e-mail and we can make a deal. If not, I'm calling Wise Pharmacy (off Wadsworth and Bowles in Littleton) later in the week to see how much they charge; my civvie doctor here highly recommends them. 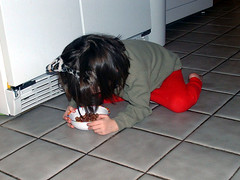 kenwestervelt for the books, especially Fresh Milk. It cleared up any residual breastfeeding guilt I was carrying and did the extra favor of having more information on the little girl a lot of milk from the bank Mom donated to in 1982 went to. Very useful.

Here's the Book-A-Minute version of Laurel's latest escapades: Absolutely enthralled by expanded train set and table. Bear in the Big Blue House video inspired best one-day success with potty training yet. While pretending to be a cat, asked to be fed dry cereal in the bowl on the floor with hilarious results.