Just a quick update to let everyone know I'm still alive. It seems that since I mostly beat down my girly woes of this summer I've been catching colds more often than former East Germans change their underwear. (One of the major US weekly news magazines did a "by the numbers" sidebar after the Berlin Wall fell that stated East Germans wore the same pair of underwear for an average of 21 days.) I finally unpacked my Zicam zinc spray and vitamin C, so this one should be less unpleasant than last month's cold.

Today was Evergreen's Homecoming parade and carnival and I planned to go down and help Mom twist (she was there in clown), but the idea to take Laurel along backfired because she didn't understand that the bouncy inflatable rides were too crowded for her to join in on and she head-butted Himself so hard it knocked it glasses off. 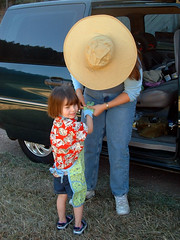 After her tantrum over being taken home subsided, she settled down and was pretty agreeable for the rest of the day, especially after we met Amy at the cabin. She got spoiled with a cute set of an apron, gloves and kneeling pad to dig in the cabin's garden, pet a neighbor's cat that came over and their pygmy goats through the fence.

judecorp, do you think it's worth it to see Donnie Darko in the theater? It opened today in limited release at the Madstone and I'm itching to take Himself to see it. If we do I need to jump on it because I missed their limited showing of Gigantic and I don't think we'll have the chance to see it until it comes out on DVD.

On a TMBG note, we're pre-ordering our copy of Bed, Bed, Bed this weekend. Hooray for mildly off children's books, since I'm debating buying Amphigorey and Amphigorey Too since I scored Amphigorey Also a few weeks ago for $6 on clearance at a bookstore (a chain one, but I received a gift card to it for my birthday). It always cracks me up to read Eloise book reviews on Amazon and see how many people get righteously indignant instead of laughing; double for the reviews of Shel Silverstein's Who Wants a Cheap Rhinoceros?. If the latter merkins read more, they would have known he was a satirist and published in Playboy long before he wrote children's books. I only aspire to have a career like that.