The tax holiday is definitely flypaper for the scary locals. We hit Lowe's (the good independent hardware store in town is closed on weekends, so Lowe's the is the lesser of two evils) for more gas for the torch, another piece of pig iron for our pseudo-anvil, and a shaping hammer and it wasn't any worse than a regular weekend. (I'll post more about what Himself is doing with all of it later.) Then we made the mistake of going to Staples to see if they had a toner cartridge for my laser printer and it actually took us ten minutes to get the 50 feet from the door to their toner display. Most of the problem is that the people shopping today are incapable of looking up and/or reading the aisle-end signs that I always thought were pretty explicit about what any given aisle has. Meh.

On the way home, we ordered a drink from Sonic with cherry in it and actually got cherry instead of watermelon. Very happy about that. Their new peach cream slush is pretty good too -- real bits of fruit in it and it's actually blended. (Our local store seems to have quit blending cream slushes a few months ago.)

Funny ha-ha: While waiting at a stoplight, a pair of mating dragonflies flew in front of our idling car. They were moving too fast for me to get a picture, but my initial reaction was "hey, humping dragonflies!". Himself responded, "They're mating. Haven't you seen that before?"

Funny scary: About two blocks short of where Berkeley/US 13 merges down to two lanes from four with a center turning lane, a tractor-trailer passed us on the right. Out of my usual attention to detail, I noted the truck was from someplace called MDV Nash Finch, then we cracked ricer jokes since there were large Hyundai logos on both the trailer and its mudflaps. I don't like being passed on the right, so I did my best to ignore it until I noticed the driver finally realized the road narrows to two lanes and decided to merge left at the last stoplight (New Hope Rd) before the change. The truck narrowly missed taking out the supersized SUV in front of us, which bothered me. After getting home, I looked up the company name and found out they're a big East Coast distributor to military exchanges and commissaries, so the truck must have just barreled along in the right line straight from whenever it got on Berkeley (tractor-trailers can't use the main gate) to there without noticing the road markings indicating the road narrows after the New Hope light.

(Those of you that read

sage_and_sea will recognize this as an expansion on a comment I made to an entry of hers earlier today, but I'm posting it here so I can refer to it later.)

Yesterday, I heard a visiting fellow in religion at Princeton talk about the potential Episcopalian schism over gay marriage on NPR's All Things Considered. He said something that really resonated with me: by making such a big deal about gay marriage with the argument that the Bible condemns homosexuality, it's making the statement that the few mentions of it in the Bible are more important than the far greater number of mentions of other issues like idolatry and adultery. That is a far more dramatic statement than the great schism between the Roman Catholic and Orthodox churches nearly a millenia ago.

(If you want to listen to that commentary piece, go to All Things Considered for Friday, August 1, 2003 and scroll down to the segment title "Commentary: A Schism in the Episcopal Church?".)

When Weekend All Things Considered ended, we scrambled to find something on TV to watch since sports crap usually preempts weekend evening news. Carefully avoiding Lawrence Welk (which PBS shows, whee), I stumbled across the Mrs. World pageant on PAX.

Note to self if I ever get a lobotomy and wind up directing something like that:
- Dozens of women doing syncopated movements out of sync looks stupid;
- Asymmetrical one-sleeved dresses covered in sequins remind me of cheap hookers;
- If you're going to have dozens of women swing their hips to "All That Jazz", don't half-ass it;
- Slim skirts are a stupid idea if you're including a kick line, especially with a group that can't do anything in sync; and
- If you're going to have a line of people do a cascading movement, practice it until they can do it fluidly.

I wonder if I can file with them for the minute of my life I was too stunned to change the channel back. 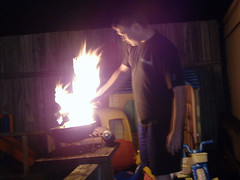 Subject courtesy of Himself; I'm not quite that blunt when naming things.)

While trying to come up with something savory to do with beef for dinner, Himself struck upon wrapping seasoned steak in bacon. Will update later with how it came out on the grill.

JoJo: If it comes out, should I post it to