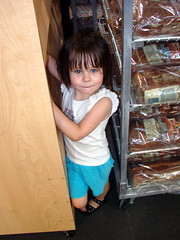 The weekend was. Nothing exciting to report although I did have Boston creme-filled donuts (not from Krispy Kreme), got computer things more in order (still have to fiddle around with the printer), and helped Laurel finish two thank-you notes from her birthday.

Laurel has learned to be stealthy. So far, it has mostly translated into her trying to sneak treats, but she surprised me on Saturday night when she disappeared around a mid-aisle display while we were picking out fruit and popped around the far side shouting "peek-a-BOO!" just as I was starting to look for where she could be hiding.

I felt surprisingly good most of the weekend but the front coming through has me wishing my sinuses were filled with expanding foam. I apologize in advance to anyone who finds me terser than usual until the barometer settles out and my head follows.
Collapse