I wanted to say I'm home again, but this place isn't home to me. I'm functioning at less than usual due to a combination of a cold, travel fatigue, and bug bites acquired while unpacking the car here, but I hope to be back in the swing of things in a few days.

Highlights of the trip included

saarlander (my best friend) and Kathryn being home while we were, having lunch with

mountain_hiker's post here), scoring a LEGO table (kid-height table with a studded surface and a bag in the center to hold LEGO bricks) and four ladderback chairs to re-seat for $35 at a multi-family yard sale, and getting a lovely few inches of snow. (:

We spent a total of five days on the road, which was mostly forgettable. People in Kentucky drive like Kuwaitis, the Sam's Club in Topeka does the best tire service ever (45 minutes after picking up a roofing nail on I-70, we had a new tire and were on our way), and I owe Hayden unending gratitude for giving me copies of the NPR production of the original Star Wars trilogy. They admirably filled the gaps where we couldn't pick up NPR or mockable talk radio (Savage Nation is Howard Stern for conservatives).

I may post a longer recap later. Be warned now that I'll be posting (linking from my LJ) a metric buttload of photos, including pictures of Himself as a little burrito, Cap'n Bob in his heyday (including photos from the 10th Mountain Division and his Popocatapetl summit) and pictures of my paternal grandmother's family from Dad's trip to Mexico last month. 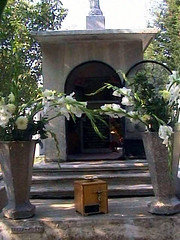 Incidentally, tio Alfonso's ashes went to Mexico in a cardboard box they carried in a shiny black vinyl tote bag. Airport security never once searched through it and they're now interred in the Campa family crypt in Mexico City.

Since I'm catching up on entries from when I was on vacation, I stumbled upon

If it explains anything, I was exposed early on to Great Books, graduated from a school that puts an emphasis on the classics, and generally read anything that doesn't bite me first. I tend to get bored with romance and (some) Westerns, but everything else? Bring it on.
Collapse