Can baby poop be considered a Weapon of Mass Destruction? She's been eating better than usual lately (more veggies and milk) but tonight's poop was a not-quite-solid mess I can smell all the way out here. (Soiled diapers go in a trashcan in the bathroom on the west end of the house that we change every other day.)

We thought about constructing a trebuchet the other day and using it to hurl diapers at the neighbors. One of them runs an auto repair business from his backyard and really gets music (thump, th-thump, thump...) going on weekends, so he'd be an easy target... but it's not worth it since by this time next year, we'll be gone and everyone else will still be here, letting their dogs run willy-nilly and competing to see who can make the most noise.

Speaking of noise, the first unit to look like a house has arrived. (

kenwestervelt, this is what you saw when you stopped by today.) Prior to its arrival, the neighborhood consisted of single- and doublewide trailers of 1970s and '80s vintage on individual acre lots, but a few weeks ago one of the units across the road underwent an addition-ectomy. (Its side yard abuts the backyard of the unit directly across the road from us.) This wasn't surprising, since the addition looked like an invitation for leaks -- it was two or three rooms tacked on/over the side of the trailer, which looked as if it had never had an addition post-demolition. A few days later, an RV joined the cars that regularly live there and an entire afternoon of noise ensued as the trailer was moved onto a flatbed trailer that sat in the road for several days. 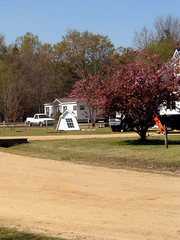 The old unit was trucked off over the weekend and the new unit arrived late Monday, front and back halves on separate flatbeds. They brought in a crane on Tuesday and set the halves in place, so now I expect several more days of work to complete whatever needs to be done. Today the crane was lifting up dormers for the second floor (it doesn't look high enough to be more than a loft, but our ceilings are so low I feel tall) and I got an amusing shot of one of the pre-assembled dormers sitting in their yard.

And now with the arrival of warm weather, it's time for a thorough vacuuming of the house that'd been neglected for the past few weeks since my sinuses weren't up for the noise and dust (the onboard HEPA filter is good, but I think this house produces more dust than any other I've lived in) and we need to keep any food crumbs down to be less attractive to the ants, which are starting to come out in force.
Collapse