Christmas Eve was fairly amusing -- we had dinner at the Waffle House out on Wayne Memorial (I had a craving and the one closer to base is smokier than Philip Morris' test labs) and braved K-Mart for a gallon of milk since everyplace else was closed. I also scored the funny church sign picture (see post) on the way home, and afterward Himself parted out our poor airman's box turkey, which I'd slow-cooked all day. (I don't enjoy dealing with a whole turkey, but 12 pounds pre-cooking yielded 9 pounds of shredded meat for enchiladas &c.!)

Holiday phone calls were off this year, but I managed better than thought -- so far, we've talked to some of my family (Mom and Amy; everyone but Dave's down in LA), some of Himself's (his mom, Denice and Grandma Harmon), and

willpower16. I think he only called because I e-mailed last week asking for an address to mail his [small] gift to, but meh. 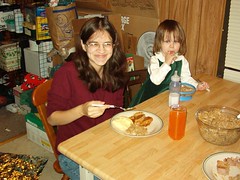 Dinner was our typical minimalist kinda meal -- turkey roast, cheese-laden mashed potatoes, herbed bread stuffing and mixed veggies. I meant to make a pumpkin pie, but simply didn't get to making a piecrust. I shall sometime this week as Joy of Cooking has a decent-looking pat-in-the-pan piecrust recipe that offsets the difficulty of making enough work space to roll out a regular piecrust. Tonight (Thursday) I made cupcakes and mini-Bundts, but I haven't frosted them yet.

kenwestervelt is sitting at the kitchen table playing Fluxx with Himself and drinking soda. He brought over leftover ham from Christmas with his family. Life is good and I've managed the past week without too many mood swings. (:

...And you think pregnant women have weird ones! In the past week, I have had cravings for: artificial orange (soda, Tic Tacs), chili with Fritos, McDonald's cheeseburgers, vodka (not you, Glen), sweet potatoes and caramel frosting.

Now that the boys have wound down the Fluxx-playing, one of them will be venturing out with me for cheeseburger. Possibly also horseradish, celery salt and V8 (thanks for your recipe,

That is all.
Collapse