Friday: made honey baked chicken for lunch (only meal Himself's home for right now), nearly finished the last of the cross-stitch plant markers, loved Law & Order: SVU although I missed details due to Laurel being awake. 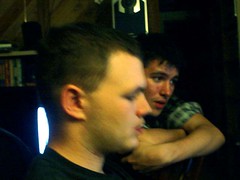 Saturday: received package from parents (thanks for all the fun things, will apply the CO native bumper sticker to the car when it stops raining). Acquired Sam's Club card of my own and a swank toaster with wider slots for my bagels ($12 out-of-box on the clearance rack, w00t) from Wal-Mart.

Retrieved Jake and had a very nice smoke-free dinner at Texas Steakhouse where Laurel tried to eat crayons and many details of the Big Game Project were hammered out with such excitedness on the boys' part normal diners were giving us curious looks. Had an interesting exchange with small Mexican boy in Michael's while the boys were in The Christian Soldier next door, then parted ways with Jake. After washing dishes and getting Laurel to bed, Jake and Adrienne came by. They worked on Big Game Project while I did more unpacking (two less boxes, ooh rah) and watched parts of Saturday Night Live.

Sunday: Woke up briefly at 0800 to find the Big Game Project work winding down and J. and A. leaving. Went back to sleep and let Himself deal with Laurel, getting out of house just in time for 1300 appointment for pictures at Wal-Mart. Waited forever, amused the photo girl by only doing 2 poses as she suggested picture of Laurel alone (she started wailing the minute I put her on the table prop) and we said no. Went home and all napped. Called off gaming, all too tired.

Later picked up Jose and his laundry, dropped me off at Lowe's, everyone came back for me and to pick pizza up. Watched Spiderman on DVD while Jose's laundry washed and (mostly) dried and Himself's uniform was pressed, boots polished. Sent them off, put Laurel to bed during the news.

Next day off, we are going to have mini sit-in at Tricare office on base to figure out why Himself's paperwork is being filed with the wrong region (central/TriWest) causing snafus in things being paid by them. Also making me an appointment at the clinic so I can renew the fight for non-hormonal birth control and more phenergan without a repeat of having to be IV'd three times.
Collapse