1. What is your lineage? Where are your ancestors from? The Reader's Digest condensed version: I'm Mexican/Yaqui Indian with a twist of African, Spaniard and Dutch (don't ask, it's waaay back) from Dad's side. I'm minor pedigreed (eligible for DAR, Mayflower Society, and 4-H's Camp Marshall in Spencer, MA is named after my great-grandfather) New England by way of emigrating Brits from Mom's side. 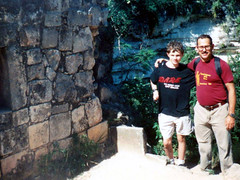 2. Of those countries, which would you most like to visit? *shrugs* I've already been through northern Mexico, though I'd like to see more of the country. There's something that bothers me about my gringo husband having seen Chichen Itza before the age of 10 and I have yet to see it.

3. Which would you least like to visit? Why? Spain, just on general principle of not liking conquistadors.

4. Do you do anything during the year to celebrate or recognize your heritage? Does raising my quarter-Mexican daughter bilingual count? Seriously, I'm not really big on celebrating much of anything, although I admit to having the urge to go cruising on Federal Boulevard in Denver every Cinco de Mayo weekend and sometimes making atole because it's one of my comfort foods. I also refuse to eat canned refried beans unless I have absolutely no choice (it takes less than two hours to make them from scratch, although they taste better made overnight)... and I flat out refuse to eat at either Taco Bell or Denver's ugliest landmark, Casa Bonita.

5. Who were the first ancestors to move to your present country (parents, grandparents, etc)? My dad's ancestors were here before the United States claimed Aztlan for itself. My mother's ancestors first arrived in the States in 1609.
Collapse