In the spirit of making up for last year, I carved three pumpkins. I really wanted to do more, but between my sinuses, a cold and other obligations, I didn't get to it. Impressed the trick-or-treaters to see two on our front step -- one a freebie Lanterns of Liberty pattern, the other carved by my little sister. It probably just creeped out the crowd at the Little Bear, who were treated to the Denver Broncos logo and an F-15E Strike Eagle. (They had a pumpkin carving competition... no word yet on how many votes either of my entries got.)

Since I wasn't up to going outside in the cold and wind, my sisters took Laurel out for her first trick-or-treating rounds ever. They went all the way around the block and returned with most of the candy Laurel collected, since she dropped a piece at a time out of the side of her stroller. She had her first lollipop afterward, although she didn't get too far into it before she tried to stick it in her hair and it was summarily removed. 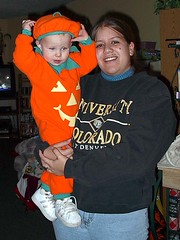 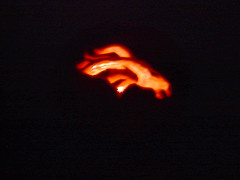 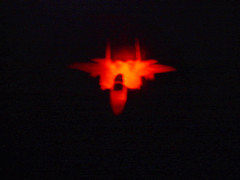