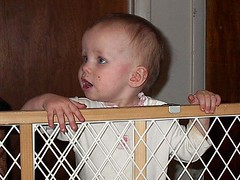 In addition to her usual climbing [the coffee table, chairs, sofas, boxes], Laurel has discovered she can gain an inch or two in height by sticking her toes in the hard-plastic mesh of the all-plastic baby gates. (They retail under the name Supergate III; we have two of those and three traditional wood-frame/plastic-mesh gates around the house.) We may have to buy her a climbing harness sooner than planned.

Laurel's also lucky to have lots of people who know how to fall around the house. Her uncle (my little brother) David had just picked her up to go sit on the loveseat when his shoe caught on the coffee table --its bottom is just high enough off the floor to catch toes -- and he went over the table with Laurel in his arms. She landed safely on the loveseat while David landed sprawled on the floor. Laurel's fine, but now Dave has a "battle scar" (a 3- or 4-inch long scrape) on his leg to show off to his friends.
Collapse